Surah Ash-Shams in English (Arabic: الشمس, "The Sun") is the 91st surah of the Qur'an, with 15 ayat or verses. It opens with a series of solemn oaths sworn on various astronomical phenomena, the first of which, "by the sun", gives the sura its name, then on the human soul itself. It then describes the fate of Thamud, a formerly prosperous but now extinct Arab tribe. The prophet Saleh urged them to worship God alone, and commanded them in God's name to preserve a certain she-camel; they disobeyed and continued to reject his message; they killed the she-camel and God destroyed them all except those who had followed Salih. 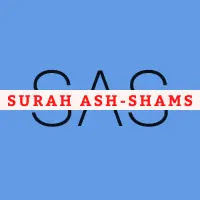 • 1-10 Oaths that man’s happiness and misery depends on the purity or corruption he hath wrought in it.
• 11-15 Thamúd was destroyed for rejecting their prophet. In the name of Allah, Most Gracious, Most Merciful.
By the Sun and his (glorious) splendour;
By the Moon as she follows him;
By the Day as it shows up (the Suns) glory;
By the Night as it conceals it;
By the Firmament and its (wonderful) structure;
By the Earth and its (wide) expanse:
By the Soul, and the proportion and order given to it;
And its enlightenment as to its wrong and its right;-
Truly he succeeds that purifies it,
And he fails that corrupts it!
The Thamud (people) rejected (their prophet) through their inordinate wrong-doing,
Behold, the most wicked man among them was deputed (for impiety).
But the Messenger of Allah said to them: "It is a She-camel of Allah! And (bar her not from) having her drink!"
Then they rejected him (as a false prophet), and they hamstrung her. So their Lord, on account of their crime, obliterated their traces and made them equal (in destruction, high and low)!
And for Him is no fear of its consequences.

Here we provide you Surah Ash-Shams Text Pdf File. You can easily download this surah shams pdf and recite this surah and get benefits by this surah.

Benefits and Virtues of Surah Ash-Shams

1. Our Beloved Prophet Muhammad sallal laahu alaihi wasallam, said that the reward for reciting this Sura is compared to the things upon which the sun and the moon shine.
2. Our Beloved Imam Jaffar Sadiq (Radi Allahu Tala Anhu) has said that the person who recites Surat as-Shams, al-Layl, ad-Dhuha and al-Inshirah will, on the Day of Judgement, find all creatures of the earth testifying on his behalf and Allah will accept their testimony and give him a place in Jannah.
3. Those who recites Surah Shams, Surat Layl, Surat duha and Sura Inshirah on any day or any night, there is nothing which would not give witness for his recitation of these four surahs on the day of judgement, so much so that the reciter’s hair, face, blood, muscles and bones would give witness and everything on earth would come forward to stand witness for him.
4. Then Allah would say: “I have accepted the evidence of all of you for my servant, now I send him to paradise. Whatever he likes will be given to him there, and more through My mercy and favour.”
5. Those who recites Surat Ash-Shams is like that very rich man who gives away in charity all that he has; and if the reciter is not a man of means, Allah would provide for him favourable turn of circumstances and divine guidance,
6. He would be guarded wherever he might be, The Reciter will have many benefits ; he would be a amiable and popular man among the people; Allah would increase his means of substance and he would be freed from losses, worries and poverty.
7. If you writes Sura Ash-Shams on a china plate, wash it with clean water and drinks it, inshallah, his trembling would go away.
8. Recitation of Surat Shams benefits you to increase in sustenance, courage and popularity amongst the people.
9. Recite Surat Ash-Shams on water to cure fever.

This surah can be considered a tafseer and an explanation of that one central ayah and those two pathways and gives us an insight into human psychology and personality.
91:1 وَٱلشَّمْسِ وَضُحَىٰهَا
1) By the sun in its morning brightness
This is a surah of many oaths and one opinion on oaths held by a minority of scholars is that every time Allah (swt) takes an oath by any of his creations there is a word implicitly understood – rabb. For example, this verse would be rendered ‘By the Lord of the Sun’.
For the most part though the sunnah is that when we take an oath we take it by Allah (swt) but when Allah (swt) takes an oath He has the right to take it by whatever he wills. In this verse Allah (swt) swears by the Sun but then adds another attribute.
The word duha here has been defined in two ways. Some have called it the light of the Sun whilst others have called it the entire day especially considering the day exists due to light given from the Sun.
The majority opinion though comes from the linguistic analysis of it which implies that it is when the Sun comes out partially but not fully and to the extent that you can still look at it, so not the scorching Sun but rather the soothing morning light of the Sun.
It is also worth noting that Allah (swt) takes two distinct oaths here, swearing by the Sun and then by its morning light as opposed to a single oath by the soothing Sun. Note also this glow or duha is only attributed to the sun as an exclusive feature and not any other light source, like a torch or lamp for example.
91:2 وَٱلْقَمَرِ إِذَا تَلَىٰهَا
2) And by the moon as it follows it
The word talaa in Arabic has two origins, one of which means to read and the other which means to follow right behind something. In the previous ayah there were two oaths separated by a waw, however, in this ayah the moon is not given a unique entity, rather it is given a subservient quality.
Allah (swt) swears by the moon as it follows the sun. When the moon becomes full it reflects light off the sun and draws light from it and hence is in a subservient position and this was also a view of the Salaf. It is not uncommon also to see in the Quran that when Allah (swt) talks about the day and night He (swt) always mentions the day first.
91:3 وَٱلنَّهَارِ إِذَا جَلَّىٰهَا
3) By the day as it displays its (the sun’s) glory
The word jalla is to give brilliance to something, where you give something that is already bright exposure. For example, the lamp that is covered up can only be appreciated when it is exposed. In classical Arabic tajal-la was used to describe when a wife beautified herself for her husband thereby exposing her full covered up beauty.
The sun is what causes the day to appear but here Allah (swt) is saying that it is in fact the day that gives the sun the opportunity to show and present its full glory. Allah (swt) creates opportunities every day for the brilliant sun to be appreciated.
Another opinion on the pronoun ha is that it is refers to the earth. An oath is being taken against the morning as it gives brilliance to the earth but that is a weaker opinion as the word jalla is used to describe exposing something that already possesses light, which the earth does not.
91:4 وَٱلَّيْلِ إِذَا يَغْشَىٰهَا
4) And by the night as it conceals it (the sun)